4 Extra at the British Seaside

Seaside entertainer Tony Lidington takes a trip to Brighton for Radio 4 Extra and reflects how this city has inspired a wealth of seaside memories captured in the BBC Sound Archive.

Tony came to Brighton in the eighties as a student and set up his own Pierrot Troupe, The Pierroters, named after the rotting West Pier. There are first hand memories of what it was like to go on a seaside holiday between the wars in the 1984 programme called ‘Sand Between the Toes’.

Tony meets Max Tyler an expert on the Fol De Rols. He and Tony hear them perform in an extraordinary piece of archive from 1937 when four of the shows, hundreds of miles apart, were brought together live by the magic of wireless. There are also insights into Brighton’s very own Cheeky Chappie, as Tony visits a Fish and Chip Shop in Brighton where the Max Miller Society has set up a museum.

Gavin Henderson president of the National Piers Society reveals that seaside Piers were initially places of sophistication, almost the arts centres of their day, and Rachel Clark of the West Pier Trust looks to the future and the plans to create a new vertical Pier on Brighton seafront.

Tony celebrates the Great Days of the West Pier in his 1995 Archive Hour ‘Oh What a Lovely Pier!’ with contributions from among others the late Corin Redgrave.

4 Extra At the British Seaside Episode 1

4 Extra At the British Seaside Episode 2

4 Extra At the British Seaside Episode 3 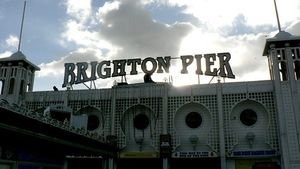 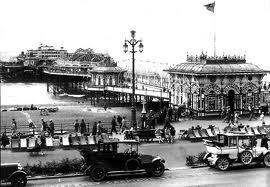 In 1983, I formed a pierrot troupe – ‘The Pierrotters’, named after the rotting West Pier in Brighton. At that time in my life the pier stood as my inspiration and muse on the seafront just outside my flat in Regency Square. I bought an old, second-hand banjo with my 21st birthday money; spent nights sewing-up yards of white bridal satin and black lycra; learned 6 songs with my friends from Sussex University and went busking on the beaches and promenades. 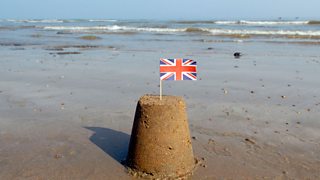 We ended-up performing for the following 27 Summer seasons at countless resorts, venues and festivals throughout the country – even representing all seaside entertainers at the inaugural gala performance of the National Theatre of Variety at Blackpool Grand Theatre & Opera House and being presented to Her Royal Highness Queen Elizabeth II at Buckingham Palace on behalf of British street and beach entertainers.

I was a student in the early 1980s when I started my research into seaside entertainment – it was an age when the do-it-yourself Punk ethic and the emergence of what was known as ‘alternative comedy’, created the opportunity for a whole street theatre industry to develop for almost the first time since the Second World War. Yet the history of street or outdoor arts in British popular culture appeared to be virtually unknown. Like so many other popular artforms such as pantomime, street art, pantomimists, fairgrounds and circuses, the seaside traditions of minstrel troupes, concert parties and pierrots were yet another example of so-called ‘illegitimate artforms’ being denied their relevance and even their existence – for there is barely any published material about such a vast entertainment industry employing thousands of artists in hundreds of troupes throughout the country.

However, it is clear from my study of 19th & 20th Century popular culture, that seaside entertainment is a key component of understanding how the popular music of our own times has evolved: The Beatles and The Kinks could not have existed without the countless seaside troupes or artists like Clifford Essex, who took the music hall and drawing room ballad traditions and presented them to an even wider, family-based audience. The same is true of British comedy – sketch shows like ‘The Fast Show’ , or sitcoms like ‘Not Going Out’ could not have existed without the likes of Arthur Askey, Tommy Handley and Max Miller, whose formative years of performance were forged at the British seaside as part of the concert party troupes performing between the wars.

Radio 4 Extra at the British Seaside  delves into the BBC Radio archive to admire and understand the way in which the seaside has contributed to British popular culture today. The seaside is a quintessential part of being British – the coastline defines our national borders and it is to this geographically liminal space (where sea and land meet), that the British character is most apparent: the British sense of fun and mischief has always been a part of the seasides since they became the destination for mass holiday-making in the mid-Nineteenth Century. Yet even before this, from the Regency Age of King George IV’s outrageous self-indulgence in Brighton, the seaside has been home to the exotic, the saucy and the experimental in all its cultural forms – architecture, engineering & technology and behaviour…and it still is!

It was at the seaside that the first electricity was used for lighting and for railways. Vertical structures (like Blackpool Tower) and horizontal structures (like Brighton’s West Pier) appeared to defy gravity and were in the vanguard of contemporary Victorian engineering. The most innovative art movements occurred in Poole, Staithes & Newquay and of course the seaside has always tolerated outrageous social behaviour – just as can be seen in Brighton, Blackpool or just about any other seaside resort today.

‘The Pierrotters’ are the last in the venerable tradition of the professional seaside pierrot troupes and we carved a route for the 21st Century outdoor arts scene to emerge. It has been a real treat to look back into the treasure-trove of BBC archives on seaside entertainments and a true delight to be able to revisit some of my old Brighton haunts and meet some of the friends & colleagues with whom I began my career. Mind you, I still work at seasides and festivals with my flea circus and sideshows…so maybe I’ll see you at one of them sometime soon!